We also offer a Next Working Delivery service (although pretty much Guaranteed 99% of the time, please be aware of current demands on every Courier in the Country during the pandemic) if you really need the item in a hurry, this is available to select during the checkout or by calling us on 01823 250060 if it's a little close to our cut-off time.

We'll also dispatch on the same working day as well to ensure your order is on its way to you as quickly as possible without any delays and send you an email with full tracking so you can monitor your delivery.

On the morning of the delivery, some of our Couriers (Royal Mail and DPD as examples) will send you a text or email with a delivery slot or to leave the Courier some safeplace instructions.

Please Note - We do not dispatch orders on Bank Holidays or Weekends.

Sometimes it is possible to order for Next Day Delivery up to 4.30pm Monday to Friday - get in touch if you require it urgently.

If we have the goods in our warehouse, we can even offer a same day delivery or collection service if you're local - for more details please call us on 01823 250060.

We now guarantee that, subject to stock availability and technology allowing, if we receive your order by 3pm Monday - Friday (excluding Bank Holidays) we will dispatch it that same working day - or we will give you your next order (to the same value) absolutely free!

The item must be in stock and readily available in our main warehouse, your order paid and accepted in full, and printed in our warehouse by 3pm in order to qualify.

We will confirm your order and stock status by email during working hours.

We are so confident in our guarantee that if we fail to deliver as promised you can have your next order to the same value, absolutely free!

Please note that this guarantee does not apply during periods of holiday, bad weather or business disruption beyond our control (including during COVID-19 - as our staff, suppliers and couriers are working under exceptional circumstances - but we will do our absolute best). We will always notify you by email in these extreme circumstances and keep you updated with your order 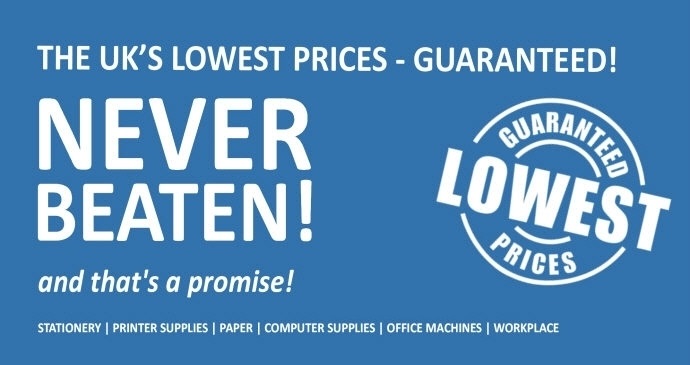 The UK's Lowest Prices Guaranteed - We won't be beaten - and that's a promise!

We monitor our prices every day to ensure we offer our customers the best prices. In the unlikely event that you do find a product at a lower price through a UK based online retailer, we will refund 100% of the difference plus an extra 10% even up to 7 days after your purchase!

If you do find a lower price and need to take us up on our Price Promise, simply call us on 01823 250060 or email us with the following details to contactus@choicestationery.com.

In addition to our standard terms and conditions the following will apply, which we reserve the right to amend at any time, for this offer.

1. The item must be of the same make and or quality.
2. The item must be in stock and available to ship that day.
3. Clearance, sale or end of line items do not apply.
4. The company must be offering delivery inclusive prices and of the same class of delivery.
5. UK mainland suppliers only.
6. Excludes products that are sold on marketplaces such as Facebook, Amazon, eBay and onBuy or manufacturer direct sites. 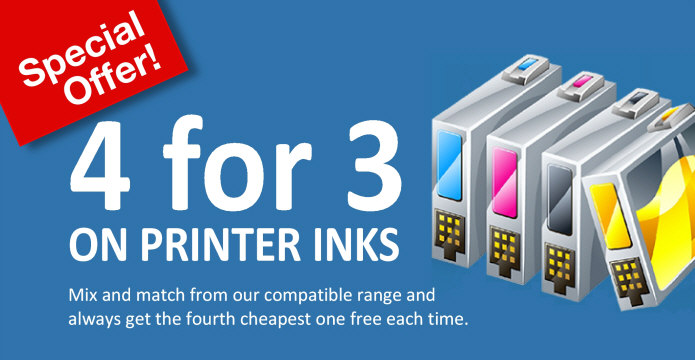 Everyone likes some free ink... Get 4 for 3 today!

Pick and Mix from our range of Think compatible inkjets and toners with 4 for 3 across the entire range.

Choose any 4 and only pay for 3, getting the fourth cheapest in your basket free everytime.

Don't Forget! You must add all 4 products to your basket, as although our system is clever, it doesn't know which 4th one you want!